Jeffery Ezell, who completed the first cohort of the Pivot Power Huddle, an intensive mind-setting course, initially walked through the doors of the Finish Line Boys and Girls Club ready to play basketball, content with a high school diploma and working minimum wage. When he graduated from high school in May of 2018, his only motivation to get a job was to help support his mother and sisters.

“I hadn’t been thinking long-term,” said Jeffery. “I just looked at my life and I didn’t even think I needed to take next steps. I just thought ‘well I have my high school diploma, I made it.’” 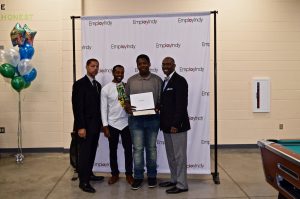 When Jeffery was young, his father passed away and he took over the role as “man of the house.” This involved helping raise his younger sisters, working to help pay the bills, and occasionally staying home to take care of things around the house while his mother went to work. Growing up in a single parent household, Jeffery was predicted to do poor in school, be less likely to graduate, and have limited social mobility. Establishing relationships with Erik Davenport, Pivot Re-Engagement Center Manager, and Jamarro Johnson, CAFE Youth Employment Specialist, gave Jeffery the courage to move beyond his community- and self-set expectations and join the Power Huddle course.

When asked how the Power Huddle impacted his life, Jeffery could not choose just one thing – he mentioned the importance of soft skills and learning about steps taken to get a job, but then passionately described his greatest takeaway: that “some things in life you just can’t control.” Gaining this knowledge was the turning point for Jeffery – he obtained a renewed awareness of his barriers and made the conscious decision that they wouldn’t stop him from reaching his full potential.

Since completing the Power Huddle, Jeffery has further engaged with Jamarro at CAFE and is in the process of enrolling in YES Indy services and establishing an “Individual Service Strategy.” He plans to explore his dream of becoming a police officer who manages a K9 unit.

“I met with Jeffery a couple times before he started the Power Huddle and he rarely followed through on what he said he would do,” said Jamarro, Jeffery’s career navigator. “It is amazing to see how much he has grown mentally to see where he is now at a point that he is ready to take on life and start accomplishing his goals.”

There are many young adults throughout Indianapolis who just need a little push to not only just show up, but to believe in themselves and strive to meet and exceed their full potential. Between administrative costs, materials, and time invested, it takes $1500 to process one young adult through the Pivot Re-Engagement Center and the Power Huddle. This amount has the potential to change lives and EmployIndy’s current funding can only go so far to support individuals like Jeffery­­­. Please consider partnering with us as we work with other community organizations to serve all Marion County residents.