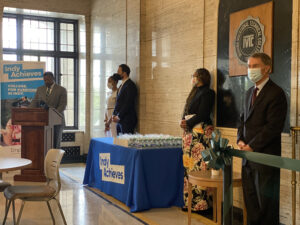 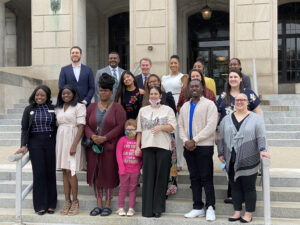 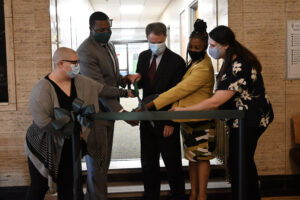 The new offices remained open following the ribbon cutting, allowing students to see the new space and connect with Ivy Tech and Indy Achieves representatives. You can check out WISH-TV’s news coverage of this event to learn more.

The unemployment rate in Marion County has faced record highs throughout the duration of the COVID-19 global health crisis. Many residents have been faced with not only the collective uncertainty brought forth by the pandemic but, also, the adverse tribulations that ensue after losing employment.

The Regional Workforce Partnership (RWP) coordinated efforts with local nonprofits, employers, state agencies, and community organizations to assist the residents of Indianapolis in getting back to work as quickly and safely as possible. These efforts, however, were tailored to intentionally fulfill the need for a diverse pipeline of talent amongst local employers. The utilization of collaboration and unification is key in bridging the gap between the job seekers and employers of our community, and, as so, the Rapid Re-Employment Response plan was initiated.

In August of 2020, this plan came to fruition through the partnership of EmployIndy and Ascend Indiana. These two organizations utilized the Ascend Network, an online technology platform, to connect dislocated workers with available jobs and training opportunities. EmployIndy and Ascend Indiana adapted the platform to include a variety of job seekers with differing educational backgrounds and experiences, all while providing personalized support to help each individual navigate their career paths.

“Bringing on new technology and being the first expansion partner of the Ascend Network while diligently working within this partnership to make sure that the platform aligns with the populations EmployIndy serves has been a crucial learning process,” says Betsy Revell, Vice President of Talent Solutions at EmployIndy.

Over the last year, 944 job seekers have completed their logins to the Ascend Network. Of those job seekers, 443 have scheduled meetings with EmployIndy Recruitment Managers, who meet one-on-one with job seekers to assess their resumes, interview skills, and overall job readiness.

Based on those preparations, Recruitment Managers either refer individual job seekers to WorkOne Indy for additional career-ready enhancement or directly admit them to the Ascend Network to launch their profiles. Nearly 256 job seekers have been referred to WorkOne over the duration of Rapid Re-Employment Response, cumulating a total of 357 career-ready job seekers as active profiles within the network’s talent pipeline.

As of August 20th, 2021– the one-year anniversary of EmployIndy and Ascend Indiana’s utilization of the Ascend Network– 212 job seekers have been placed in employment positions through Rapid Re-Employment Response.

Placing over 200 job seekers in positions amid the obstacles of the COVID-19 pandemic has required major flexibility and adjustments as workforce developers. But, as Revell states, “What is incredible about reaching this milestone is that we have been able to see that, the more people engage, the more outcomes we achieve.”

“The human connection aspect of the network establishes a relationship with the job seeker and enables the Recruitment Manager to provide the job seeker with confidence in interviewing and ongoing encouragement to persevere in their job search,” says Gray.

9 March 2021 – Indianapolis – Today launches the fifth year of the Project Indy Youth Jobs initiative. Through the Project Indy digital job search platform, thousands of Indianapolis young people are connected to jobs each year. This tool is used as a resource by over 100 employers as they seek to fill their full-time and part-time positions and youth as they look for employment, particularly during the summer months. As with all other things, this initiative and the young people it supports have seen the repercussions of the COVID-19 impact.

In 2020 over 32% of young adults 16-24 were employed in the hospitality and tourism industry – one that has suffered greatly from the pandemic. While this is felt globally, Indianapolis particularly struggled with a large portion of the local economy relying on the success of those industries.

“Project Indy has been incredibly successful over the past five years, connecting young people with jobs and skill-building opportunities in industries across Indianapolis,” said Mayor Joe Hogsett. “This year, Project Indy will be a part of our city’s economic comeback from the pandemic, boosting our hospitality and tourism workforces and contributing to overall job growth. And it will help employers as well, as young workers are exposed to new career paths in our city’s core industries. It truly is a win-win.”

Project Indy is a location-based, job search platform connecting young adults to local employers. With a large majority of the hospitality industry traditionally staffed by youth and young adults, major sporting events like the ones Indianapolis will host this March provide opportunities for youth to not only make money, but to obtain important job skills that will help them be successful as they progress through the workforce.

“Indianapolis is fortunate to be hosting upcoming basketball tournaments on the national stage,” said Department of Tourism, Event and Sports Management Chair at IUPUI, Brian Krohn. “Not only will the buzz positively impact our economy, there will also be many part-time jobs now available for young workers to assist with the influx of visitors and our hope that this will provide the opportunity for many of our local businesses to open their doors again.”

In Indianapolis, sports and events have always been tools to drive economic growth – and the tournaments will be no exception.

“Events like GenCon, FDIC, and now March Madness, held at the Indiana Convention Center and Lucas Oil Stadium are often considered to be what defines Indianapolis. I’ve always maintained that it’s the people behind events like these that make our city great,” said Andy Mallon, Executive Director, Indiana Convention Center and Lucas Oil Stadium. “By hiring through Project Indy, employers in all different industries, including hospitality, have the opportunity to invest in the next generation of young ambassadors for Indianapolis.”

By offering jobs throughout Indianapolis, Project Indy will be able to service events like those taking place this month. As youth are gainfully employed, they learn additional skills that will help them as they progress through their career.

“The ongoing impact of hiring a young person goes far beyond the day-to-day job responsibilities. What they learn will influence who they are as a person, how they grow in their soft and hard skills, and what industries they choose to go into when they formally progress into the workforce,” said Angela Carr Klitzsch, President & CEO of EmployIndy. “This provides us as employers an opportunity to make what we know will be beneficial investments both short- and long-term as we impact someone today and arm them with the skills and knowledge to succeed in the future.”

Employers can sign up today to have their positions listed on the Project Indy job search platform at projectindy.net