LaKeshia Hardy was raised in a single-parent home and became a mother just after graduating high school. She was on welfare in her younger years, but even in hard times strived to stay positive – she knew that she wanted more for herself and her family. She began to look for steady work and LaKeshia filled out a simple application on one sheet of paper and landed a job on the assembly line at Carrier. Over the years, she realized she wanted to be challenged in a role she could achieve if she gained experience beyond her high school education.

Initially, this job changed her world. LaKeshia was able to finally get ahead. She started working overtime to pay off bills, earned seniority to take better shifts, and reached a point where she was saving money. She and her husband worked different shifts to accommodate their children, and life was good – busy and stressful, but good.

Suddenly, after 13 years, Carrier announced they were moving hundreds of positions to Mexico. LaKeshia had built a life around a job that was going away and now had the opportunity to make this change she had been imagining. As a Carrier worker, she had a limited skill set and she knew with further training and education she would be able to achieve whatever goals she set her mind to – and inspire her children to dream big along the way.

“I had been making money – it was a job – but it never felt like a career,” says LaKeshia. “Going back to school, that felt like a path to a career.”

Interested in learning about a new career options, she took full advantage of meeting with a WorkOne Indy career navigator. LaKeshia was informed about different manufacturing training and certification opportunities, detailed in materials created by CAEL specifically for Carrier workers. But she decided to go down a different path and make choices that would directly impact the future of her career.

As she decided to utilize this opportunity to make a transformative change, her career navigator did a thorough analysis of her skills and interests, urging LaKeshia to hone in on a career that she would love. Because of her own life experience, the idea of helping troubled high-schoolers overcome barriers, struggles, and emotional difficulties was a passion she wanted to pursue. Then, identifying social work as a correlating field of study, she was connected to Ivy Tech and enrolled in an associate’s degree in human services.

Working towards her goal, LaKeshia is set to graduate in May 2019 with intent to receive her bachelor’s in social work from IUPUI. She is involved with her department’s charitable student group, maintaining a 4.0 GPA, made the Dean’s List, and is eager to be the first in her family to earn a degree. “The services available have not failed me, and what you put in is what you will get out of it,” she says. “I can’t wait to walk across that stage.” 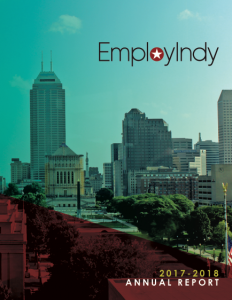 EmployIndy posted its 2017-18 Annual Report on September 25th, showcasing the accomplishments of the first year of work of our five-year strategic plan. Read the intro letter from our President & CEO, Angela Carr Klitzsch below – and be sure to sign up for our monthly newsletter to get EmployIndy info like this directly to your inbox.

September annually celebrates and honors American workers and their impact on the well-being of our country. We at EmployIndy follow suit to commemorate another year advancing local workers on pathways that ensure self-sufficiency.

EmployIndy plays a pivotal role in the prosperity of our city’s economy and its underserved and underrepresented residents. Leading EmployIndy through notable transition to streamline investment towards a strategy of youth development, neighborhood prioritization and place-based workforce development, and career pathway creation for low- to mid-skilled residents, has been both gratifying and a worthy challenge.

The Marion County Workforce Ecosystem is made up of many unique stakeholders – the work of an intermediary to coordinate these critical partners is no small task. Parts of this local system have historically been fragmented, and our focus in year one of EmployIndy’s five-year Strategic Plan has been on building organizational capacity to unify and advance the system. In year two EmployIndy will continue increasing investment in programs, providers, and initiatives that ensure inclusion and equity to effectively increase labor participation as the economy continues to grow.

It is with immeasurable pride that I share the distinguished work of our entire team in EmployIndy’s 2017-2018 Annual Report.

All my best,
Angie

This press release was published by the City of Indianapolis.

$1.2 million will be dedicated to transition assistance and hiring incentives

“By lessening the financial burden on our neighbors during this transition period, while incentivizing companies to hire these talented individuals, these resources will provide support for the short, and long-term success of our displaced workers and their families,” said Mayor Hogsett.

In April 2016, Mayor Hogsett announced that the Carrier Task Force would establish a fund to assist affected workers with money secured from Carrier and its parent company United Technologies Corporation. The $1.2 million figure corresponds to the local tax incentive package accepted by the companies in 2011.

Transition Assistance
In an effort to support affected Carrier workers in their search for new employment opportunities, $1,000 per employee has been dedicated from the Mayor’s Carrier Fund for transition assistance. EmployIndy will administer a supportive services program designed to supplement costs associated with employment transition. Affected Carrier employees can claim up to $1,000 to for such expenses as transportation, childcare, utility bills, and tools or other work-related equipment.

Business Hiring and Retention Incentive Program
The City will take steps to ensure workers displaced by the closing of the Carrier plant successfully complete the transition to new, stable careers. $1,000 per affected employee has been set aside from the Mayor’s Carrier Fund for a Business Hiring and Retention Incentive Program, to be administered by the Department of Metropolitan Development (DMD) in partnership with Develop Indy.

Those that hire and retain a displaced Carrier worker for at least one year, in a position that pays at least $16 per hour, will be eligible for up to $1,000 in incentives. The incentives will supplement direct costs associated with hiring and onboarding that are not covered by Trade Adjustment Assistance.

“When employees are displaced from steady employment, we have a responsibility to leave no stone unturned to provide resources that will ease the financial and emotional obstacles they will face,” said City-County Council President Maggie Lewis. “The money allocated for the Carrier fund will provide much-needed assistance that will help affected employees with their job search and engage our business community in an innovative manner that is bound to produce meaningful jobs.”

Work is already underway to engage affected Carrier workers and connect them with local companies. Employees may immediately begin the formal application process to formally apply by visiting the WorkOne West location at 3400 Lafayette Road. Local businesses interested in the incentive program may email carrier@nullindy.gov, or contact DMD at 317-327-5355 or Develop Indy at 317-464-2218.